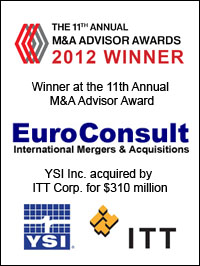 New York, NY – December 14, 2012 – The M&A Advisor announced the winners of the 2012 M&A Advisor Awards on Tuesday, December 11th at the 11th Annual M&A Advisor Awards Gala to a jubilant, sold-out crowd at the black tie affair at the New York Athletic Club. The acquisition of YSI Incorporated by ITT Corp was named a winner for the Industrial Goods and Basic Resources (Over $100mm) category. EC Mergers & Acquisitions, Inc. acted as exclusive financial advisor to ITT Corp.  The event was hosted by Bloomberg Television Reporter Shannon Pettypiece, featuring a keynote address by Joe Brusuelas, Senior Economist at Bloomberg.

“Since 2002, we have been honoring the leading M&A transac­tions, companies and dealmakers. EC Mergers & Acquisitions, Inc. was chosen from 423 nominations and over 600 participating companies to receive the award. It gives us great pleasure to recognize EC Mergers & Acquisitions, Inc. and bestow upon our highest honor for M&A firms and professionals,” said David Fergusson, Senior Managing Director, The M&A Advisor.

“EC Mergers & Acquisitions, Inc. represents the best of the M&A industry in 2012 and earned these honors by standing out in a group of very impressive finalists,” said Roger Aguinaldo, CEO and Founder of The M&A Advisor.

The gala is the premier celebration of the year for the industry’s leading Dealmakers and is held in conjunction with the 2011 M&A Advisor Summit that featured over 350 of the industry’s leading M&A professionals participating in exclusive interactive forums led by over 50 M&A, media, academic, and political stalwarts. In addition to the 2012 award winners, five leading M&A industry pioneers – John Wm. (Jack) Butler Jr., Partner, Skadden Arps, Slate, Meagher and Flom LLP; Dr. Mario Garnero, Chairman, Brasilinvest; Rajiv K. Luthra, Co-Founder and Managing Partner, Luthra and Luthra; Alexis Rodzianko, CEO, IFC Metropol; and Wang Wei, Chairman, China M&A Group were inducted into The M&A Advisor Hall of Fame for their outstanding achievements and accomplishments in the industry.

The M&A Advisor
Since 1998, The M&A Advisor has been presenting, recognizing the achievement of and facilitating connections between the world’s leading mergers and acquisitions, financing and turnaround professionals with a comprehensive range of services including M&A SUMMITS; M&A AWARDS; M&A CONNECTS™; M&A ALERTS™, M&A LINKS™ MandA.TV and M&A MARKET INTEL™. Visit www.maadvisor.com to learn more.